Guide on Revocation of Cancellation of GST Registration

Now, in this blog post, we are going to move forward but first, you start further reading. Acquiring knowledge about these things would help.

Once, you have read you might have got an understanding of how things are going to evolve further.

A taxpayer whose registration has been canceled by the GST officers Suo moto can apply for revocation under GST. The application needs to be filed within 30 days of receiving the notice of cancellation.

As you might have learned in reasons for Suo moto cancellation, GST Officers can cancel the GST Registration on account of non-filing of GST Returns for a continuous period of six months. To revoke the same, one needs to file all the pending returns along with late fees and interest if applicable. Then only, he should apply for revocation of GST Cancellation.

Have a look at the GST REG-21 form provided. 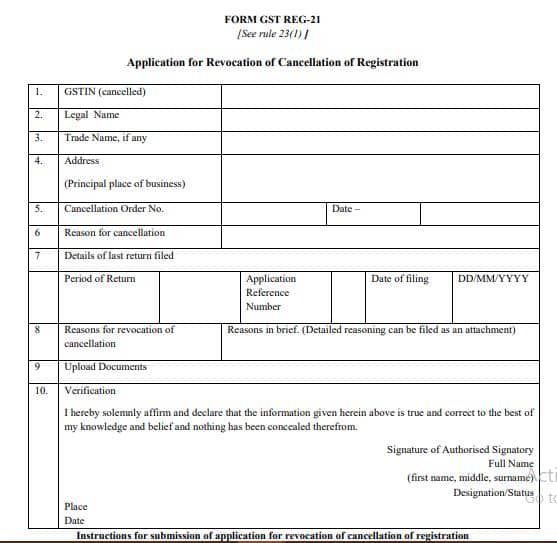 Step1 The first step is to login into the GST portal.

Step 2: After logging in to the GST portal, one should move towards the Services>Registration>Application for revocation of GST Registration Cancellation.

Step 3: The basic details, Address of Principal place of business, Cancellation Order Number (GST REG-19), Reasons for cancellation of GST Registration would be mentioned on the screen.

Now, one should enter the reasons for revocation of cancellation of GST Registration, attach the supporting documents, click on the verification icon, select the name of authorized signatory, enter the place of adding information and submit the application via DSC or EVC.

So, the GST REG-21 is successfully filed now and a message would be received on the provided phone number and email.

No fees are payable for revocation of cancellation of GST Registration. The status of the application can be tracked on the GST portal.

GST REG-22 Order for Revocation of Cancellation Of GST Registration

GST REG-22 is issued by the GST Officer when the revocation application filed under GST REG-21 is accepted by the GST department. It simply means, GST Cancellation has been revoked and the registered person’s GST is active now.

The registered person can now issue tax invoices and file GST Returns. GST REG-22 normally is only issued when GST REG-21 is filed within the time limit specified. 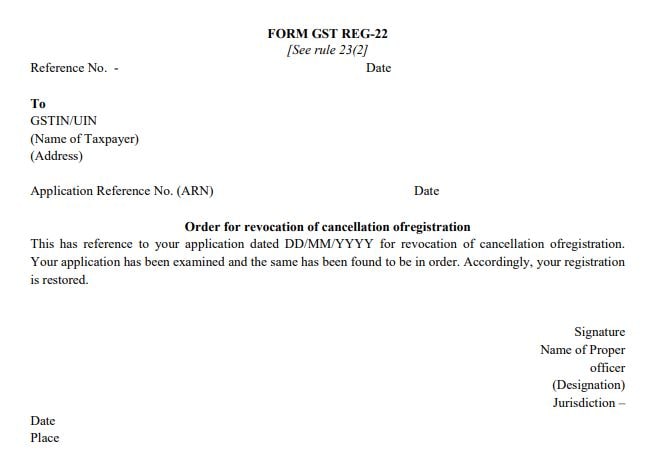 It is clearly mentioned that the GST Registration has been restored.

Now, moving forwards what if the GST Cancellation Revocation application has not been accepted by the GST Department.

GST REG-23 is a show-cause notice issued in response to the revocation of cancellation of GST Registration. The reason for the issue of Show cause notice is that the GST Officer is not satisfied with the supporting documents and is not ready to revoke the cancellation.

Remember, GST REG-23 is different from the show cause notice issued initially for starting the cancellation proceedings.

The reason for objecting to the GST REG-21 would be mentioned on the notice. The time limit to reply to GST REG-23 is seven working days from the date of service of notice. In case, a response to the notice is not filed within the time specified. GST Officer will move forward with the records available and reject the revocation application filed under GST REG-21. The chances to revoke the cancellation will be over.

Have a look at the format of GST REG-23. 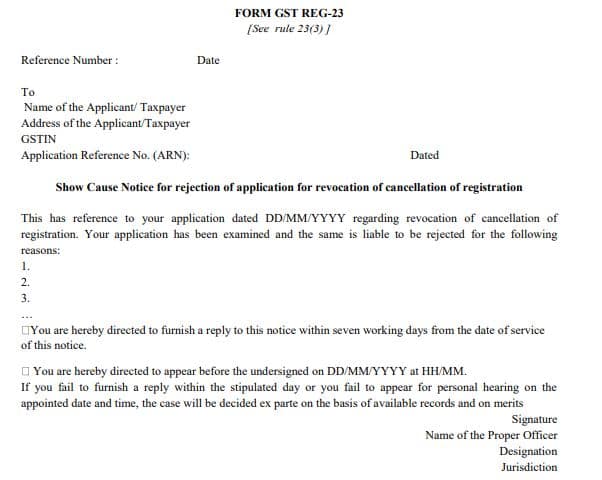 Moving forward, on how to file a response to GST REG-23

GST REG-24 is filed as a response to the notice received under GST REG-23.

Have  a look at the extract of GST REG-24 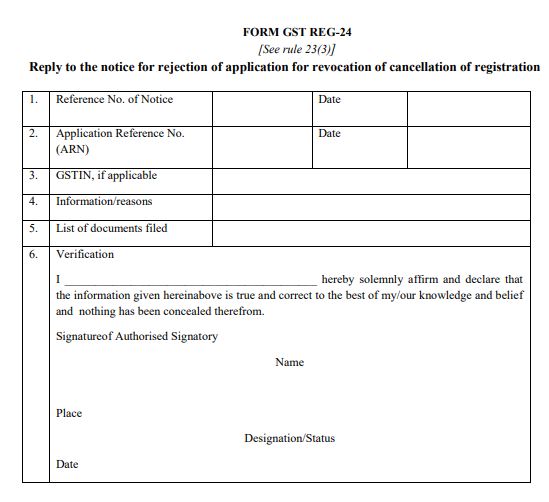 However, the time limit has been extended for filing of revocation of application to 30th September 2021 where the due date of filing such application falls between 1st March 2020 to 31st August 2021 via CGST Circular 158/14/2021 GST on 6th September 2021. The benefit would be available irrespective of the status of the application.

Now, understand the benefit of such notification on the application.

Further under Section 30 of CGST Act, from 1st January 2021, a new proviso allowed for extension in the due date to apply for revocation by Additional or Joint Commissioner or the Commissioner for 30 days. Now, this provision created confusion amongst the taxpayer which CBIC clarified.

The extension is only available on account of the non-filing of returns.

Akash Arora is a Chartered Accountant. His domain areas include Indirect Tax (GST), Direct tax, Internal Auditing as well as Statutory Auditing. He is a business advisor to FMCG, Construction, and Automobile Entities all over India. Feel Free To Contact Him. 🙂

Talk To Expert
Whatsapp Us